Browsing independent bookstores, readers may notice in contemporary literature an ironic quirkiness, a lack of ironic artifice, or a fusion of the two. Writers choose ways of using language that set their voices apart and reach their intended audiences, and today, irony and sincerity are two important modes characterizing the way literature is written. This can leave Christian creative writers wondering which is better – irony or sincerity?

Many Christians’ gut feeling may be that sincerity has the moral highground. After all, earnestness describes early church Christians – breaking bread together with “glad and sincere hearts” (Acts 2:46, NIV). But does contemporary literature’s sincerity have similar innocence?

Christian writers and the marketplace

First, let’s consider—is today’s contemporary literature a dialogue in which Christians can converse? Francis Schaeffer wrote, “The Christian is the one whose imagination should fly beyond the stars.” Christian writers feel this. They feel awe at a phrase spun just right. They feel that writing is part of what they were made to do. They want to pour this out as worship to God who is Lord of all of life.

The words of Christian writers who venture into the literary marketplace will challenge readers. Author Tobias Wolff wrote in the New Yorker about encountering poetry made by Christians, after years of dismissing Christianity. He writes: “And what drew me back, some time later, toward the possibility of faith? Poetry. George Herbert and Gerard Manley Hopkins and T.S. Eliot. One night, I was reading the last lines of ‘Little Gidding’ to a friend, my voice thick with emotion, and when I looked up he was staring at me with kindly amusement. ‘So,’ he said, ‘you really like that stuff ?’” Writers immersed in God’s story will bear witness to the possibility of faith.

Important conversations are taking place in literature. Universal questions persist—who are we, where do we come from, and where are we going? New questions arise exactly because of this cultural moment. As Christian writers engage these questions, their starting points, struggles, and humility as well as their answers bear witness to God’s story.

These writers will be challenged, too. As God moves in His world, He meets artists’ scorn. Christians must prepare to meet derision or misinterpretation. Discernment is imperative. Discerning acceptable content is important; even more than this, writers must let God, not the arts, give them identity. Craving it or not, writers and readers identify with authors they love. They have that experience that C.S. Lewis describes about friendship – “The typical expression of opening Friendship would be something like, ‘What? You too? I thought I was the only one.’” The Christian writer can begin to want validation from secular authors. So easily, this can supersede validation from people at church, who seem less hip and more awkward in comparison to the arts.

Christians must find solace and identity in Christ. 1 Peter 2:10 says, “Once you had no identity as a people; now you are God’s people. Once you received no mercy; now you have received God’s mercy” (NLT). God has given Christians an identity. As His people, they identify with the rejected Christ and love other people Christ gave Himself for. The Christian writer must ask Christ’s loved ones in the church to pray for them, bolster them, and come find them if they fall on dark times. The literary world is a place God enters. God is not limited to the Christian enclave. He knows the chemical composition of every drop of ink; he formed mouths to make sounds that make words. The arts give beautiful, worthwhile human connections. Prayerfully, with wisdom, with identity given by Christ, grounded in His Word and in the church, the Christian writer can engage the questions asked in the contemporary literary marketplace. 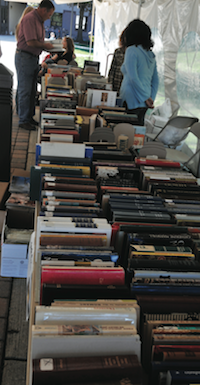 As one enters the literary dialogue, the way writers present questions tangles together with how readers approach these questions. Whether the questions are posed with ironic fanfare or with sincerity affects the reader’s thought process.

So, what exactly do irony and sincerity look like today? First, consider irony. 2010 irony is a departure from traditional irony. Mockumentary TV shows like The Office and Parks and Recreation and the increasing co-opting of hipster culture have made irony practically the air we breathe. This is both fun and wearisome. 2010 irony is complicated. Knowingness has produced it. Hip cultural references are only a click away, so one sees every passé implication of whatever one is doing, and makes jokes that wink at the person in the know. With 2010 irony, real meanings are ambiguous, but what’s not ambiguous is that self-consciousness attaches itself to each action, statement, fashion choice, or literary choice. A Georgetown Voice journalist observed about today’s irony: “We are… still used to being able to ask about sincerity and get a straight answer…yeah, my moustache is just for laughs. Today’s irony is far more ambiguous… and far richer for it” (Collins).

This ambiguity illuminates a nihilistic worldview behind irony. Much contemporary ironic literature arises from the view that if you peel back the layers of an organized and structured world, you find howling chaos beneath it. Author Michael Chabon, who skillfully merges irony and sincerity in his writing, is forthright about this worldview. In one essay, he celebrates an author for expressing “The fragility of life, of ‘reality,’ of all the structures that we have erected to defend ourselves from our constant nagging suspicion that underlying everything is chaos, brutal and unreasoning” (131-132). If all is chaos underneath, then the structures that humankind has erected are facades – all fair game for wisecracks.

Thinking of irony and sincerity as binaries is no longer valid.

Then sincerity must be the better choice for Christians, right? Let’s consider sincerity. Thinking of irony and sincerity as binaries is no longer valid. Contemporary writers crave sincerity, but for those who came of age watching The Simpsons, Seinfeld, and Late Night with Conan O’Brien, getting away from irony would be as tricky as getting away from their own skin. Sincerity looks different in the age of irony. In many cases, fear of sentimental obviousness has synthesized irony and sincerity.

Consider contemporary author Dave Eggers. Eggers, 40, has been called the avatar of his generation and has embodied hard-to-pin-down irony. He pretty much created an empire. He published numerous books, wrote the screenplay for Where The Wild Things Are, founded several nonprofits, and started three magazines, including the genre-bending taste-maker McSweeney’s.

Some reviewers classify him as a self-conscious ironist, others as the leader of literature’s New Sincerity. He’s both. Consider the acknowledgements section of his memoir A Heartbreaking Work of Staggering Genius: “The author would like to acknowledge that he does not look good in red. Or pink, or orange, or even yellow—he is not a spring. And until last year he thought Evelyn Waugh was a woman, and that George Eliot was a man” (xix). Toying with the word “acknowledgements” winks at the reader’s knowingness. On another level, it’s an admission Eggers is approachable. The book is performance, but Eggers still wants us to know his real self.

The title A Heartbreaking Work of Staggering Genius is both sincere and ironic. The book covers heartbreaking subject matter. In his 20s, Eggers lost both parents to cancer, then raised his 7-year-old brother Toph. Heartbreaking. Yet no one could get away with using such a grandiose title without irony (McGrath; Pierce). 2010 sincerity is aware of audience reactions and of layers of meaning barnacled onto words and symbols.

Still, examples of less ironic but still informed sincerity abound. It appears at poetry slams, where the best poetry is authentic with a thick skin. It appears in literary magazines. It shows up in the popular literature of social justice.

What worldview undergirds much of literature’s sincerity? The New Sincerity’s credo is: love what you define as “awesome” whether or not other people support you because you need to embrace life as the only thing that is actually guaranteed (Kharakh; Muehlhauser). Instead of posturing, say those embracing New Sincerity, instead of being ambivalent, and frittering away your years, focus on life because its sweetness is the only existence humans will know.

Acknowledging undergirding worldviews is one of discernment’s key components. The Christian writer will want to ponder the worldviews these rhetorical modes represent, innovatively challenging the view that the cosmos is chaos and the view that earthly life is all there is. Above all, the writer with a Christian worldview commits to truth—to the world that is and the world humanity hungers for.

The fact that Christian authors, like Flannery O’Connor, have enlightened audiences through irony hints that irony still has a shot at enriching culture. However, today’s irony tends to view anything that is dead serious and say, “Get a load of this!” To the Christian, some things really are dead serious. To the Christian, underlying everything is not chaos, but Christ, who is “before all things and in [whom] all things hold together” (Col 1:17, ESV). Still, irony can decimate hypocrisy to reveal solid truths that stand once hypocrisy clears.

Irony would be transformed because the gospel changes the way Christian writers think of audience and characters. Gospel-born virtues like love, hospitality, and truth shape the way Christian writers view those who will read their work. Christian irony would exist – refreshingly – without the author’s swagger or fragile ego. Joy, justice, and hope inform the way they understand the characters they invent, even when they bring trouble on these characters.

Sincerity will be different, too. Romans 12:9 says, “Love must be sincere.” The link between love and sincerity sheds light on what sincerity means. Nothing is harder or more complicated than loving well. Literature that risks dealing with genuine, complex concerns will be anything but treacle. 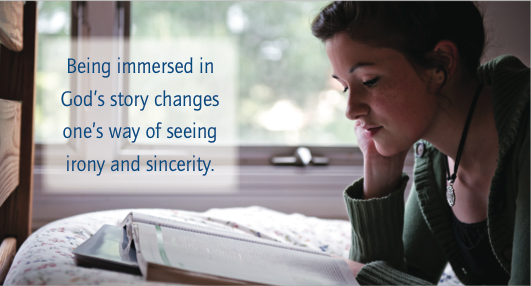 Being immersed in God’s story changes one’s way of seeing irony and sincerity; of course, that’s just a small part of how the gospel revamps one’s entire vision. Flannery O’Connor discusses this in her essay collection Mystery and Manners: “In the greatest fiction, the writer’s moral sense coincides with his dramatic sense, and I see no way for it to do this unless his moral judgment is part of the very act of seeing” (O’Connor). Believing that God fills His world frees the writer to observe the world.

Observing the world yields individuality among those who see God’s narrative. In the Pulitzer-prize winning novel Gilead, Marilyn Robinson simply presented a preacher who is an authentic human. It was radical because media rarely presents preachers as sentient, humble people. As further evidence of individuality, the poems of Jane Kenyon, Wendell Berry, Denise Levertov, Gerard Manley Hopkins, and T.S. Eliot praise the Creator, contemplate His mercy, reveal humanity and doubt, and long for God. An array of personalities comes across in Christian writers who live drenched in God’s narrative.

If you are a Christian reader and you identify the worldviews undergirding contemporary literature’s irony and sincerity, what conversations might this prompt? How could this understanding shape the way you pray for those in the arts? If you are a Christian writer, what is your story to tell? Express what God has made alive in you. Whether you meet the literary marketplace with ironic craftsmanship or starkly inscribe genuine concerns, show the world that is and the world all humanity hungers for.

For a full list of Mrs. Talbot’s sources, a bibliography on this topic, and an audio recording of her Worldview Conference session, visit www.pbu.edu/worldview.

Becky Talbot, M.F.A., is an adjunct professor in the Philadelphia Biblical University School of Arts and Sciences. She is also a staff writer for the International Arts Movement’s Curator magazine.